Introduction to the WC DX B - Archive

We were sitting in the shade of the veranda in the early afternoon. We could hear the rattle of the bongos from down in the barrancas of Palos Verdes Country. We recalled how the Palos Verdes Sundancers had brought on cycles 21 and 22 and we were confident that cycle 23 was not far away. It had taken a lot of persuading to get them enthusiastic about bringing on yet another sunspot cycle. However, once again, they were hard at it and the Great Days of DXing were just around the corner. We took a deep breath, and glanced out over the countryside, happy that all was well in this world of DX. It wasn't long before we noticed one of the local QRPers beating his way up the hill. This particular QRPer hadn't been by for quite a while, so we knew something was up.

He sat down beside us, out of breath, and looking a bit forlorn. "Tell me," he said, after a few minutes, "when will I become one of the Deserving? When will I understand the Mysteries of the Ages? What is the true meaning of DX IS?" Son of a Gun! These were profound questions and it wasn't the first time we'd been asked them. "It all takes time," we replied, "and can't you hear the activity from down in the barrancas? When the flux is back up, and you have a few more countries under your belt, you will begin to understand." The QRPer let out a deep sigh and was silent for a moment. Then he said, "That's what you always tell me. I'm tired of waiting. Every time I think I have it figured out, I miss a DXpedition, or I find out I worked Slim again. How long does it take to become a true-blue DXer? A year? Five years? Ten years?" He stood up and looked us straight in the eye. "When we reach the top of the next cycle, will I understand the Eternal Enigmas and the Inevitable Truths?" We didn't know how to answer this one, for the road to understanding is often crooked and rough. We were about to try and explain that the degree of understanding could not always be measured in years. Before we got a chance we saw another of the QRPers making his way up the hill. This one was walking his dog and had the same troubled look on his face.

He sat down on the other side of us and asked almost the same questions, ending with, "and I'm tired of waiting to become one of the Deserving." We were in an awkward situation, with QRPers in stereo! Son of a Gun! We were starting to wish we had ducked out the back when we saw the first QRPer. There was no turning back now, so we decided to divert the issue just a bit. "Let's check with Sunspot Louie!", we said quickly, "and see how conditions are." The QRPers looked at each other, then at us. "I guess it won't hurt to see if the flux is moving up, or how the geomagnetic field is behaving.", one said to the other. We smiled to ourself, sure that we had averted another crisis. So we went into the shack and called Louie on 2-metres. Sure enough, he had a report for us. "The flux is moving", he said, "and in the right direction, too! Looks like there will be DX for everyone soon, although for some more than others. The Ap is up around 15, but it should come down in a few days." Sunspot Louie was rarely wrong, but before we could pass on the good news to the QRPers, one of The Legion of Handwringers broke in. "It might look good now," he said, "but will it last? It seldom does ... there are dire days ahead! The flux may be on the way up, but so is the geomagnetic activity. There won't be many good openings for at least ..." We turned down the volume on the 2-metre rig and left him to argue with Louie.

This was not our lucky day. The QRPers had heard this and were slipping into what appeared to be a deep depression. "All we wanted to know was how long we had to wait until we became one of the Deserving, and now we are hearing that conditions will be lousy for a long time." What could we say? "All things are relative, some more so.", we replied, "Remember, what looks bad now would have been great six months ago." The QRPers were not to be consoled, and one of them glared at us with his beady little eyes. "Don't tell me how good it is when I can't even work anything above 20-metres! Besides, I don't want to hear about the flux and the AP index. Not at all! I want to know the meaning of DX IS! I want to be one of the Deserving." "Me too!", piped in the second QRPer, "Tell us about the Mysteries of the Ages. Why is everything hidden in a shroud of secrecy? Why do you always talk in circles or change the subject when we ask these questions?"

We were beginning to get the uncomfortable feeling we were out of our league. The QRPers were starting to tread on sacred ground and we weren't sure we wanted to say anything. So, as we had often done before, we hauled the QRPers off to see the Old Timer. He was in his shack, rewinding a plate choke for his amp. We weren't sure we should be bothering him. The Old Timer had answered these questions for us more times than we cared to remember, and it seemed the QRPers never understood. So we sat back and let them ask the same questions yet again. The Old Timer listened for awhile, then put the plate choke down and turned around. "These are questions that have been asked and answered many times.", he said slowly. "One more time.", he said patiently, "To be a true-blue DXer, you have to be a Believer. The Eternal Enigmas of DXing, the Mysteries of the Ages and the Inevitable Truths were born thousands of years ago. Long before Danny Weil, VP2VB, Don Miller, W9WNV and Sir Gus, W4BPD began the art of DXpeditions. Before Martti, OH2BH found new ones and Baldur, DJ6SI reactivated the rare ones. Long before the days of Romeo, 3W3RR. And before the great DXers of today who are putting on inhospitable places like Peter 1st and Heard Island." He stood up and looked at the QRPers. "Each of these DXers has added to the meaning of DX IS! in their own way. Even Slim, who first signed 8X8AA from Cray Island, was part of the true meaning of DX IS! And until you understand all this, you will not be a Believer. And if you are not a Believer, you will never be one of the Deserving." He sat back down and looked at the QRPers. They exchanged quick glances, then one asked in a timid voice, "How can we understand over fifty years of DX history when we've only been on the air for a few years? How can we ever hope to become Believers if that's what it takes?" The Old Timer was silent for a moment. Then he glanced over at us, took a deep breath, and said, "What I am about to reveal must never leave this room.", he said in a stern voice, "never! If you do, you will bring on a cycle minimum like never has been seen before. The flux will plunge to 50 and the Ap will rise to 50! And they will both stay there. Understand?"

The QRPers nodded apprehensibly. We were beginning to seriously wonder what the Old Timer was up to. So we just sat back and watched. He got down on his hands and knees and pushed the chassis of an old Hallicrafter receiver aside. He reached in underneath the bench and pulled out a dusty wooden box. He got up and placed it beside the rig. We noticed it had a sturdy padlock on it. Whatever the Old Timer had, it was valuable. We were both curious and concerned. The Old Timer reached into his pocket, removed a key and unlocked the box. He looked around, then reached inside and took out a book! "Come over here," he said, "and make sure the door is locked." He drew the curtains shut and held up the book. The front cover was worn and tattered. We couldn't make out the title, other than it had the gilded letters "DX" in the centre. "Remember," the Old Timer warned us, "tell no one what I'm about to show you." And with that, he opened the book. The pages were yellowed with age and the edges were ragged and torn. We found ourselves as captivated as the QRPers as we began reading ... 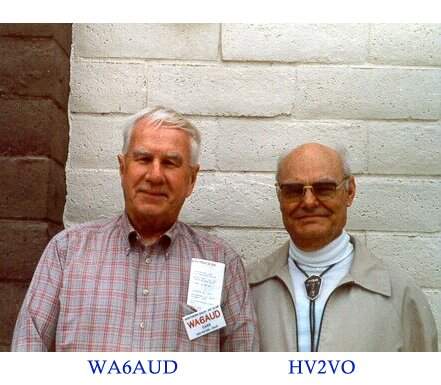